Being the owner of a small business comes with a unique set of challenges. Since our primary clients are mostly small business owners—and since ThirdSide is a small business—I’ve been privileged to compare notes with my peers on the issues we all face on a day-to-day basis.

One of the more recent hot-button issues is the question of net neutrality.

What is net neutrality? 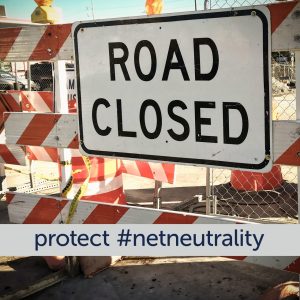 The beginning of the end? Isn’t that a little extreme?

Not really. Internet service providers (ISPs) have been pushing for an abolition of net neutrality guidelines for years. With no such guidelines in place, ISPs could charge a premium to send content across the web. Large companies like Amazon or WalMart would be able to pay a premium to serve their content faster than smaller competitors–effectively blocking the doors to these small businesses. The “information superhighway” could be replaced by a pay-to-play tollway dominated by larger companies.

So what happens after December 14th?

Nobody knows for sure. It’s possible we won’t see a change at all, but it’s possible change will be immediate. Some larger ISPs, in an effort to gain public support for their stance, have made promises to not charge premiums or restrict access. However, just yesterday Ars Technica reported that Comcast removed that pledge from their website. I wouldn’t be surprised if other ISPs do the same thing in the coming weeks.

Regardless of what happens, one thing is certain: The fight for a free internet is not over. There will be petitions, appeals, and all kinds of legal battles—possibly even a Supreme Court decision centered around the First Amendment.

The best thing you can do right now is stay informed. Read about issues that affect you and your business. And if you think these issues will do more harm than good, reach out to your representative and make your voice heard.

Next post: Is It Time to Start My Own Business?