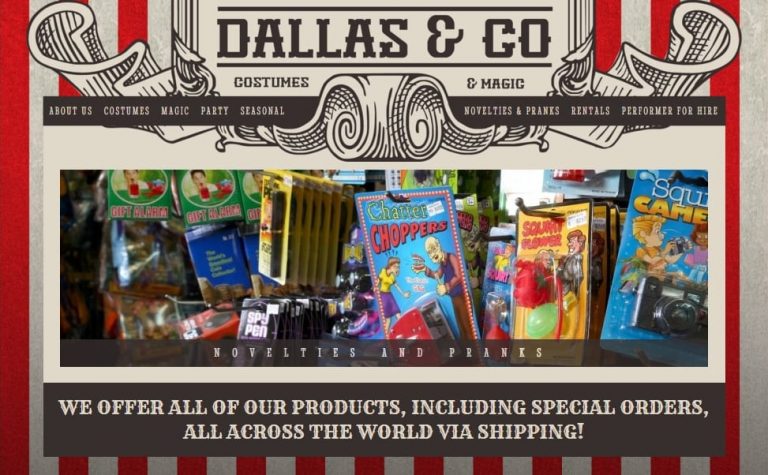 What better opportunity to work a bit of digital magic than upgrading the website for local costume-and-magic shop Dallas & Co? When founder Andy Dallas passed the mantle to his son Rob and Rob’s wife Ashley about two years ago, they took the opportunity to try something new. The result? A bright, colorful new website that’s as one-of-a-kind as they are.

When Rob and Ashley approached us in the summer of 2014, they knew they needed to make their website more accessible to their customers. They wanted to attract new shoppers, but they didn’t want to abandon the people who had grown to love the quirkiness of Dallas & Co. Having a mobile-ready site was at the top of the list of requirements along with solid being easy to find in search engines. But first, we had to get the design right.

We started with typography, exploring dozens of fonts from the Victorian era, carnival posters, vaudeville-style sideshow posters, and more. What started as a cacophony of purposely-mismatched text styles eventually morphed into the engaging style of the final site. Paired with intricate scroll work and a red-and-white striped background reminiscent of old carnival tents, the design provided the perfect stage for re-introducing Dallas & Co to the web. 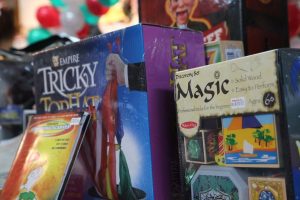 From there, it was all about the pictures! Jon Dessen at Illini Studio took numerous tours of the shop, exploring all the goodies in all the corners of the massive space. The idea was to take site visitors on a bit of a virtual tour of the shop–chances are, if you explore the website long enough, you’ll find yourself saying, “I didn’t know THAT was in there!”

The final piece of the puzzle was connectivity: Dallas & Co wanted easy ways for their customers to contact them with questions and suggestions, as well as share photos of themselves in the costumes they bought from the shop. No problem! We created newsletter sign-up forms that connect with MailChimp to make it easy to share their news with interested customers, which they’ve been using regularly ever since. We also added an easy way for customers to share photos of themselves in costumes and makeup from Dallas & Co.

The final site came together just in time for the 2014 holiday season, and the feedback was excellent. Customers loved being able to browse the site from their phones, and Dallas & Co. now springs to the front page of Google search results for people looking for costumes, stage makeup, party supplies…the list goes on.

We’re proud to have played a small part in Dallas & Co’s continued success. If you haven’t already, take a look at the new website for Dallas and Co. It’s definitely an adventure all its own!