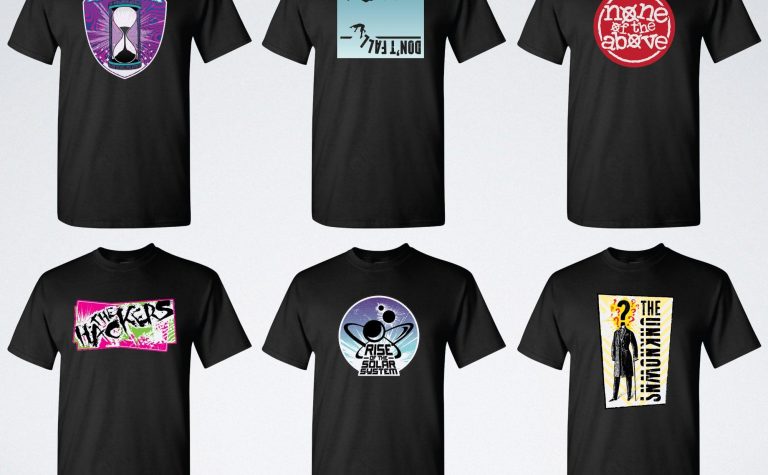 There’s more to starting a band than writing and playing music. With the music industry constantly evolving, it’s best to create a visual brand to accompany your music. This is most often done with t-shirts and other merchandise that bands sell at their shows. Recently, I had the opportunity to help out at the First Gig Rock Camp doing just that. The camps consisted of around 30-40 kids between the ages of 10 and 17. Over the course of a week, they formed bands, learned songs, and ended it with their first gig.

My passion for graphic design stems from playing in bands myself when I was younger. I wanted to have cool-looking shirts like the bands I looked up to, but I didn’t have any sort of budget to achieve that. By learning to design and screen print shirts myself, I was able to produce shirts for myself at a much more affordable price. This also increased my profit margins, making it easier for me to produce more and more merchandise. The more people you have wearing your shirts, the more free advertising you’re getting, and in the music community trends spread like wildfire. A well-cultivated visual aesthetic can help a band just as much as their music.

First Gig Rock Camp starts with one of the most daunting tasks of being a musician, picking a band name. This is where my fun began, though. I was able to sit down with each band, talk to them about their band name, and see what sort of aesthetic they wanted their band to have. They were all enthusiastic to bounce ideas back and forth and come up with a concept that everyone was excited about! Designing for bands is always a very enjoyable process. It’s one of the few times where I am able to use my own personal style in my designs, and not adhere to the brand standards of a business.

Even though these bands only existed for a single show, their shirts will live on much longer. Band shirts not only serve as a souvenir for the concert, but as a way for people to express their interests and feel connected with others who are “in the know” about that particular artist or band. Artists are even making limited edition shirts and records to increase the collectibility of their merchandise. I often see people online pay as much as $100 for a used shirt when it’s a specific collectible design. It just goes to show how important shirts and artwork are in the music community.